Who We Are
Donnie (Tobie) Denome

How does the world work?

But how does it work?

Why are we so lucky?

Why do we get to thrive?

Why are we so complicated?

Why are there so many of us?

Why can we think?

Why do we hurt each other?

Why do we matter?

Does everyone have a purpose? Are we all meant for some greater good?

Is there an order to life? Are we an evolutionary diamond?

Are we unique? Are we special?

I don’t know. Not for sure.

Is there anything we do know?

We could be someone’s dream.

We could be someone’s reflection.

We could be someone’s playthings.

We could be illusions.

But we are here.

And we can learn.

We can change things.

We’ll always be human, and we are programmed to discover.

And someday, maybe we’ll even figure out the answer

To the eternal question:

Why?
Doctor’s Appointment
by Shelley Kim

Because I was raised in rooms of gilded
Gold and silver that almost but didn’t quite
Hide the peeling papered walls,
My mouth so full of silver spoons
I never thought to ask how the world really worked
And now, I’m still hoping
Some of that silver rubbed off onto my tongue
God knows that’s all I have left

MY FINGER GUNS HAVE LONG SINCE RUN OUT OF BULLETS, IF THEY WERE EVER LOADED AT ALL | k.y
Who We Are
by Donnie (Tobie) Denome

“You need to eat.”
“No.”
“What did you have for breakfast?”
“Cookie.”
“One?”
“Yeah.”
She gives up on trying to force-feed me and lets me stay in bed. The day turns
into night and we lie there in the still silence of the early fall.
“Your phone’s buzzing.”
“Meds.”
“Come on, you gotta take them.”
“No.”
“This is important.”
“I don’t want to.”
“It would help.”
“Nothing helps.”
I take two ibuprofen and a glass of water for my headache.
“It’s really time for dinner.”
“I guess.”
“We could order in pizza.”
“Okay.”
“Is your head any better?”
“No.”
She and I watch TV. I do the dishes after we finish off the pizza, just to give me
something to do.
“Come on, you’ve got to get undressed.”
“Please.”
“It’s not good for you to sleep in those tight clothes.”
“I can’t, I can’t.”
“I’ll help.”
I stand up to go to the bathroom and faint.
“Do you have to vomit again?”
“No – not now.”
“Just tell me, okay?”
“Yes.”
I’m pathetic. She has to help me to and from the bathroom because my
headaches are so bad. The doctor said they were just migraines but I doubt that.
“What’s that?”
“My phone. Just lie there, I’ll take care of it.”
“Okay.”
“Hi, Mama? Yeah, it’s me. Leigh’s okay. Headachey. Thanks for the
recommendation to the doctor. Oh, what? Okay. I’ll call him. I haven’t heard anything
recently but you know. Always on a story. Okay, Mama. Call you soon. Love you. Bye.”
“Is Wendell okay?”
“I don’t know. He’s probably not dead.”
I don’t want to die but I don’t want to exist.
“What should we do today?”
“I don’t feel well at all.”
“Okay, baby. I have to make some calls later on today but we can just stay in all
day if you want that.”
“That would be nice.”
“Do you want to work on the… you know, the papers?”
“It’s all useless.”
“No, it’s not.”
She would give anything for me to be happy. I am happy, around her. I’m just a
total wreck as well.
“Should I stay or should I go now?”
“Stay here, come on!”
“Sorry. Just like that song.”
“Okay. But will you come here?”
“You okay?”
“Just need a hand getting to the kitchen. Need a glass of water.”
“I’ll get it for you.”
I met her three years ago. We were at some party and everyone else seemed to
be smashed. I don’t drink since it makes the headaches worse and her dad’s side of the
family has a history of alcoholism. We sat there, sharing a six-pack of orange cream
sodas and laughing. I never felt at home before her. No one actually seemed to care
about me and no one seemed to accept her.
“Heard from Wendell.”
“Yeah?”
“He’s on a train heading out of Munich. God knows why, but he is. He said he’d
explain it all once he got back to the states.”
“Germany?”
“Yeah.”
“Well, I hope he’s safe.”
The fog clears on Saturday morning. I can see far and wide. I want to take a walk
to the ocean but she says it’s inadvisable. Whatever. I won’t drown.
“Are you sure?”
“I'm Leigh, papers or not.”
As it turns out, I can’t take a walk. It’s a wheelchair day.
“Are you up for anything?”
“What do you mean?”
She’s much smaller than me. She jumps in my lap and I use the last of my
strength to wheel around the neighborhood as she shrieks in delight.
“Park?”
“Yeah. The park. But you have to push me.
The concrete bench is cold but her fingers are warm.
“I want to marry you.”
“I know.”
“No, I mean, I want to marry you.”
It’s a tiny black velvet box.
“Oh my God!”
“Please?”
“Yes, yes, of course.”​
The Creative Process
by Jasmine Liu

Despite having her earbuds on for nearly two hours and going through numerous articles,videos, and pictures, she still had no idea what she was going to write.  A blank document sat in front of her.  She had started to write something numerous times, but ultimately deleted each and every one of those starts.

Ironically, she was uncertain as what she wanted to write for her project.  Her prompt was a difficult one.  While she could write narratives and essays under her own prompt, writing using a single word as her only guideline was something that she never thought that she would have trouble writing.

She could feel her arm getting sore from trying to hold her head up.  Another minute ticked by on the clock on the bottom right hand of her laptop screen.  By now she was struggling to even get mind to keep up with her.

She let her mind drift.  The white void of the blank document and the music pumping through her ears made her think of pianos and battlefields.

I close my eyes…
I feel alive...
This is forever…

The heavy base of the music reminded her of clapping and stomping to a beat.  The nice piano going along with the beat.  Her mind started to sync with the music’s beat.  However, the word “uncertainty” continued to taunt her in her mind.  She began to think about her assignments and whether or not she completed them.  She knew that she completed them, right?  Wait, but what if she forgot something on her history assignment?  Maybe she missed one of the instructions to draw something on that map of England.  But she knew that she checked to make sure that she did not miss any of the little symbols that she was supposed to draw.  She discovered that she forgot to draw one of the little anvils that way.  The little anvils represented all the iron factories in England during the Industrial revolution.  It made her wonder, what if we did not have all those iron factories during the Industrial revolution?  We probably would not have all the metal appliances today.  Or maybe we would have discovered how to mine iron eventually.  In fact, what if we never gone through the Industrial revolution in the first place?  Maybe the world would not have been so polluted as it is now or have all those awful weapons that have killed millions.  But then she wouldn’t have so many things she would have right now.  She wouldn’t be able to have all her clothes, or a car to get to school or anywhere else.  She wouldn’t have her phone or her laptop.  The laptop that was hers.  The laptop that was hers that was in front of her.  The laptop that was hers that was in front of her that had a blank document still waiting for her.

She snapped back to reality.  She blinked, confused, as her mind sluggishly tried to register her surroundings.  She looked down.  The song that she was listening to had already finished and her earbuds were silent.  The laptop screen had gone to sleep in her musings and she circled the mouse around a few times to wake it.  The sudden blast of light blinded her and she had to blink a few times to get used to the light.

Once again, she was staring at a blank document on her laptop screen.  She sighed as she placed her fingers on the keyboard and she began typing.  Despite having her earbuds on...
Three Pillars of Questions
​by Clem Chou 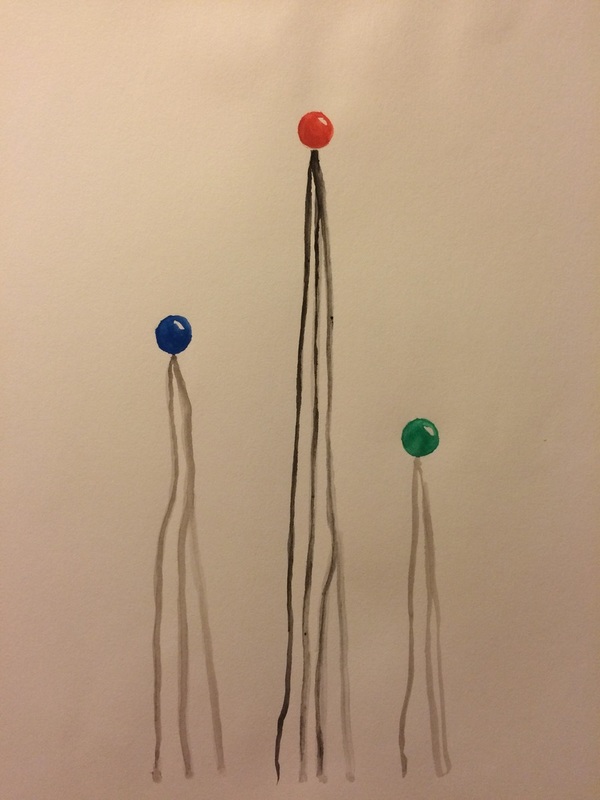